The beekeeping season is officially underway! A lot of time (literally months) is involved with getting to the point where your adopted bees begin foraging in preparation for the upcoming winter season.

As part of the natural cycle of being beekeepers, the reality is that, sometimes, bee colonies just don’t make it through the winter despite a beekeeper’s best efforts. While your colony was doing very well coming into mid-February, the harsh cold snaps we regularly experience in our environment proved to be too much this time and, unfortunately, we lost them.

That said, we’ve introduced a brand new (and vibrant) colony into your adopted beehive for this season. However, unlike previous years where we’ve installed a 3 lb. bee package to revitalize the hive, this time we were able to introduce a full-blown swarm.

When swarming, the bee colony designates a number of “scouts” who’s job is to find safe new living places for the colony. When viewing a swarm of bees, those flying outside the main cluster are almost always scout bees.

Honey bee swarms are characterized by a large group of bees that leave a beehive (man-made or otherwise) in search of a new home. Each swarm contains all of the necessary components to start a new colony.

Compared to installing a 3 lb. bee package, capturing a full swarm is a much preferred scenario (although it is never a guarantee to get one). Depending on the size, a honey bee swarm can have up to 1200% more bees than a bee package contains! 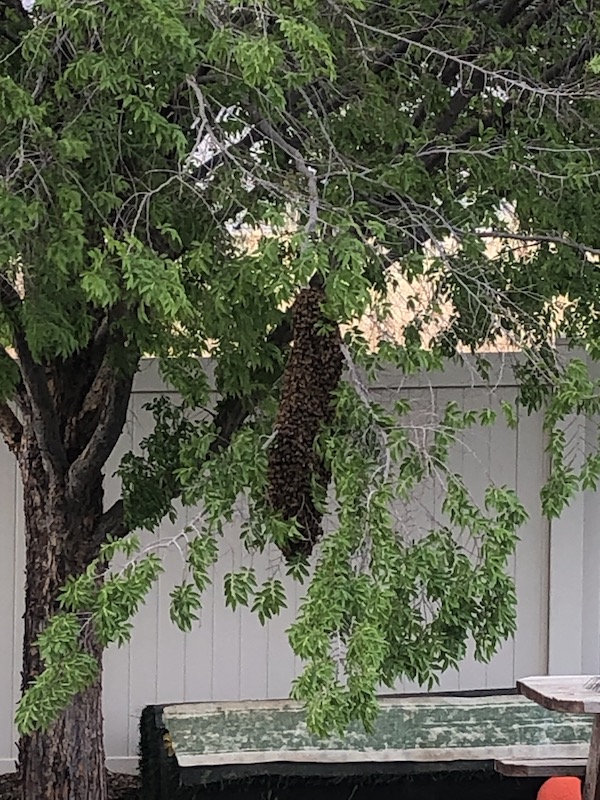 A photo of the honey bee swarm we captured and place in your adopted beehive. This swarm contains an estimated 60,000 - 80,000 honey bees (approx. 700% more bees than a bee package contains).

As you can see, this swarm has created a huge population disparity that helps your adopted colony grow much faster. It also dramatically increases the likelihood that the bees will survive the following winter (though this is never a guarantee).

Note: While honey bee swarms can look menacing, believe it or not, they are actually extremely docile when swarming. At this stage, the colony is solely focused on finding a new home. They are not even slightly interested in passersby. As long as you don’t poke a stick at the colony, etc. it is nearly 100% guaranteed that the bees will leave you and everyone else alone.

We’re very excited to have this new colony of bees in your adopted beehive and look forward to their progress this year!

The way humanity manages or mismanages its nature-based assets, including pollinators, will in part define our collective future in the 21st century

Other Things You Can Do To Help The Bees